My nana could never say the word forsythia even though she loved that damn yellow shrub. It was a running joke in my family. Whenever we’d walk past one in bloom my mom would turn to her mom and say, “What are these called again?” Nana would oblige and inevitably botch the pronunciation. It made me chuckle every time.

The woman whose house we bought took me on a tour of the garden in mid-January. The ground cover was located about eight inches below a sheet of snow. The bushes were in a deep sleep and didn’t seem to notice the cold biting at their bark. She rattled off the name of the flowers and native grasses she had planted wherever there seemed to be an unclaimed patch of sun. She stopped in front a tall bush and stalled. 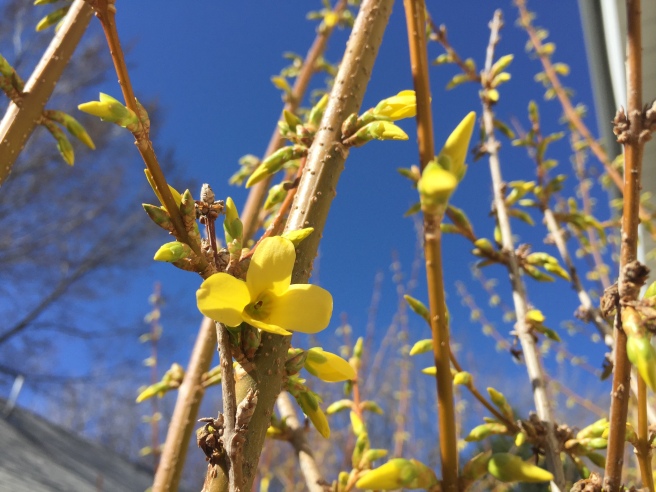 It was the only plant I could identify in the yard. (I have always been more of an edibles person when it comes to gardening.) I can check on the bush simply by doing the dishes and looking out the kitchen window. We’ve been in our new house for about a month now and the shrub is just starting to wake up. Tiny buds line the branches. I can almost make out the yellow flowers enclosed in the sepals. They seem to waiting for just the right moment to emerge. Forsythia is nature’s timekeeper. They are among the first to let you know that winter is finally over.

Lately I’ve been thinking a lot about time and tracking my own growth. When my sister was pregnant I had a garden in full swing and fruit trees that I could use as a point of reference.

“The babies are how big now?” I would ask her as I inspected my produce. “When you say the babies are the size of plums are we talking industrial plums or organic plums?”

I needed that kind of visual to acknowledge what was really happening. Each week my parents would snap a photo of her growing belly and send it to me so I could see how she was changing from 2,000 miles away. One of my favorite pictures is of my sister in her third trimester and grampa standing big belly to big belly laughing. (Even with twins, I still think he had her beat.)

The forsythia in my yard will likely have flowered and faded by the time my own fetus reaches viability. Hopefully by then we will have installed raised garden beds in the backyard and my first crop of rainbow chard and peas will already be popping through the topsoil.

I want to think in terms of the 40-week yard line. But the truth is even with 21 weeks down, I feel scared a lot of the time. Every day I hold my belly and ask the baby to give me a sign that everything is okay in there. It’s one thing to lose a tomato to a rogue squirrel, but to lose something that has kicked in you in the bladder is another thing entirely. Especially something that took years to come into being.

My nana died without ever knowing my spouse. Before she died I recorded our conversations every time I went home for a visit.In those talks she always wanted to know about my love life. Not because she wanted me to get married and settle down, but because she wanted juicy details about dating. In one of the last recordings of us nana is audibly bored when I told her that a guy I liked recently lent me his jacket one crisp summer night. She was not impressed.

This evening I was feeling particularly nervous about the baby so I went outside to examine the forsythia bush. I find inspecting the buds to be a strange source of comfort. Because I have no idea how to care for any of the other plants in my backyard; I won’t even know what they are until new growth appears. And I guess that’s how I feel about me in general, sort of just fumbling towards spring, waiting for that damn bush to pop.

2 thoughts on “fumbling towards spring”

where we left off