Gardening is teaching me a lot about life planning. Nothing is guaranteed. Nothing is counted out. And anything is possible if you know what you are looking for.

I am also learning that you miss out on life when you don’t plan ahead. For instance, I wasted one full rotation in my garden because I didn’t put the work in when the snow was lingering on the hillsides and the rain never seemed to shut off. But it did. I was just never ready to do anything about it at the time.

This little life experiment has prompted me to start mapping out my future in a more systematic way. Because right now, I am a lot of talk. With too many onions. And zero strawberries to show for it. But for now, I am going to focus on what I do have.

My compost pile is alive. Take a spade and turn over the first layer of the decaying crust and you will find worms recoil in the sunshine. I know that reaction. It is the same one your boyfriend makes when you throw on the lights when he is in bed and you are not.

The compost heap is crawling with things I cannot identify. Things that turn my weeds, table scraps, and grass clippings into the rich black fertilizer my vegetables so enjoy. And I thank them for that.

A handful of spiders have made their homes in the corners of the raised planters. Tiny webs that  mark their territory but don’t seem to catch anything at all. I wonder if I am just late to dinner, or if they are waiting for something that will never come.

I welcome the sight of ladybugs on my potatoes. Occasionally one will fly onto my leg and walk around aimlessly as if its internal GPS has failed. A part of me wonders if it has a message for me from somewhere far away. Another part knows that this is just a bug that has mistaken my body for support of another kind. 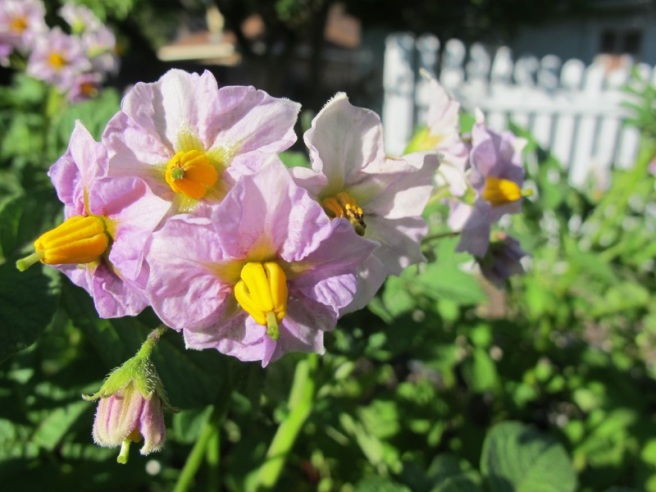 My garden is also a place of murder. In two days I killed 20 slugs and two grasshoppers by hand (and foot). They were eating my peas and beginning to snack upon my potatoes. Something had to be done.

I consulted a farmer at the local seed supply store and he directed me towards a powder to sprinkle on my crops. It contained slivers of glass that would kill the pests by slitting open their stomachs and hemorrhaging their internal organs. This sounded painful and rather unnecessary. All I wanted was them to move on to another pile of leaves in someone else’s backyard. But naturally all they wanted to do was stay.

So I purchased the powder and warned of its effects before dusting it on the plants. The next afternoon I found two little grasshopper carcasses amongst the peas. One was still breathing. It was leaning to one side and just pulsing in the dirt. I felt like a jerk. Still do really. I found no evidence of the slugs. I wonder if they combusted on contact. Or if they decided to move on without argument.

For several weeks now the apple tree has been dropping its fruit. Tiny orbs that resemble apples that land in the tomatoes pots, the potato box and cover the lawn. They hit us when we aren’t looking. And sometimes when we are.

At first I thought something was wrong. But plenty of apples  still clung to the branches. My 88-year-old neighbor tells me that the apple trees can’t support all of the fruit they produce and cast off the extras to give the best a chance to grow. I notice he doesn’t use the word abort. No one uses that word here.

I go online and find this phenomenon is called June drop.  For some reason I am comforted by this process. I imagine the tree as an old woman laden with groceries. Sometimes you have to put the bags down to rest for a while in order to make it home.

I had trouble letting go of the spinach. The life cycle of spinach is 40 days from germination to salad fixings. But I got greedy and expected more from it than it could give. I thought the leaves should be bigger. I thought they just needed more room. So I gave them space. But they just grew taller and their leaves took on a severe point at the tip. They were spindly.  And I couldn’t remember their better days.

So on Saturday I tore them from the beds and pulled rogue weeds from the now empty rows. I churned the soil and added fresh compost to the mix. I doused the soil with water and built hills for my next rotation. The farmer at the seed shop said early July is the latest you can plant corn in Utah. If you’re lucky, fall will give you a grace period for being late. It was the 16th. I already had seeds in my kitchen, I was just looking for permission to plant. To maybe mess up. To maybe not.

He said it was worth a try.

One thought on “all talk and a lot of onions”

where we left off